Once again, I’ve been on a blogging hiatus and I apologize for that.  The weather has been SOOOOOOOOOO hot here in SoCal that just the thought of going into the kitchen and turning up the heat was suffocating.  I felt bad about not cooking more often, so this past weekend we headed to K-town and picked up some meat.  On Sunday we had some yummy steaks and today we ate cha-dol-begi.

Enough rambling and onto the recipe… 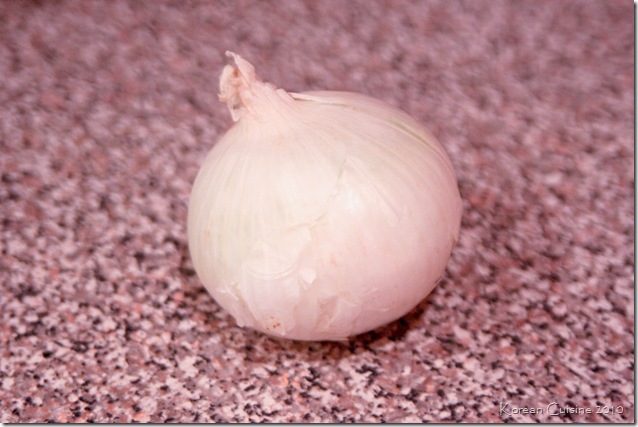 I was being lazy and didn’t want to head upstairs to grab my flash and THIS is what the picture looked like.  =/ 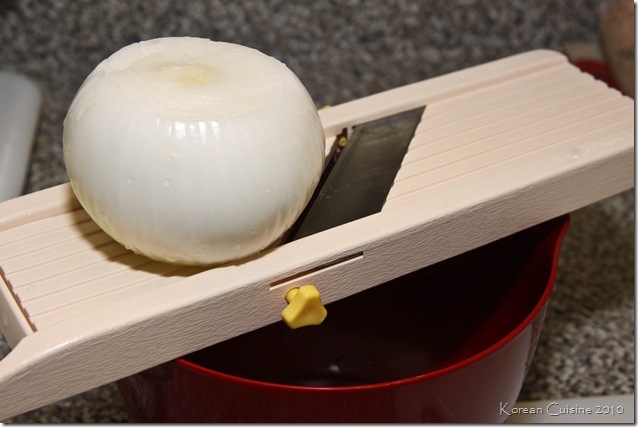 So I went upstairs, grabbed my flash and this is the result.  It’s strange how flash works better for me with food pictures, but when I’m shooting Munchkin or anything else – I rarely use flash.  Anyhow…

I usually eat cha-dol-begi (thinly sliced beef brisket) with this sauce.  But today I decided that I would make an onion salad similar to the one they *used to* serve at Byul Dae Po – one of my favorite AYCE Korean BBQ places.  The last time I was there, the server informed me that they no longer gave out the onion salad because the price of onions had skyrocketed.  =/  I dunno if that’s the truth, but I’m hoping they will serve it again in the future.  Anyhow this is my replication of their onion salad.  Super easy and a perfect accompaniment to gogi-gogi!  First, go and grab one large white onion.  You can slice it by hand, or use a trusty mandolin to do the work for you!  Slice away~ 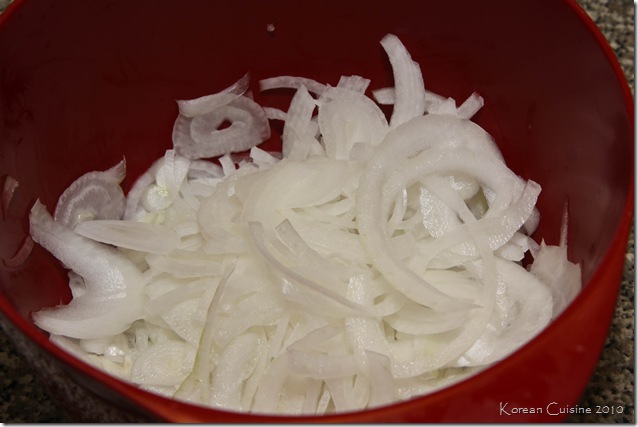 You want it thin, but not too thin… 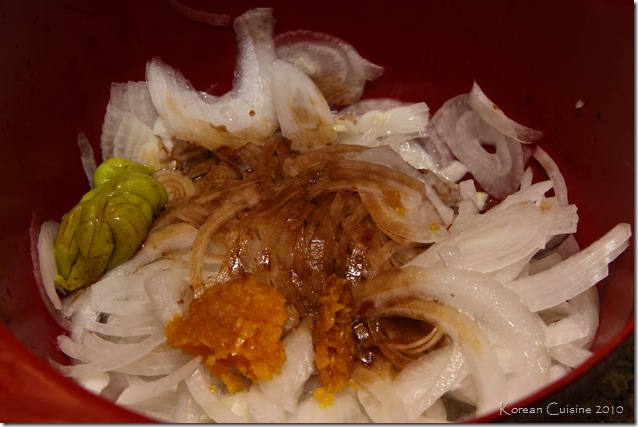 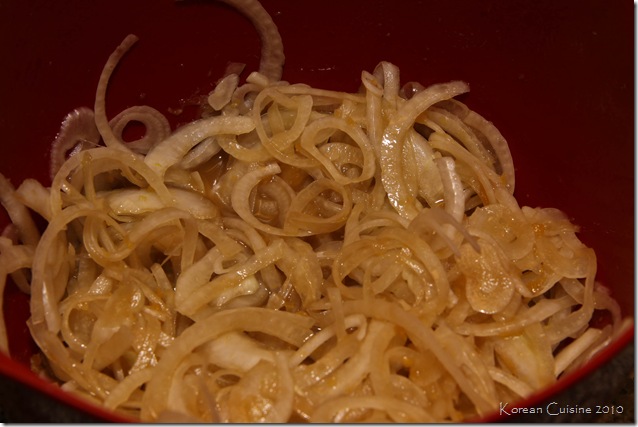 Mix it up WELL.  You do not want to bite down into a chunk of wasabi. 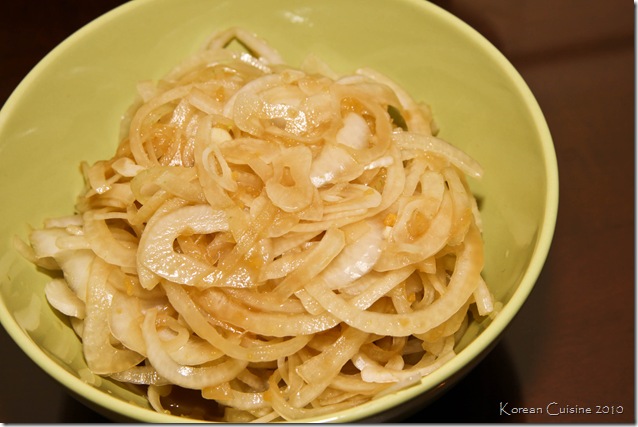 And transfer it into a nice serving bowl.  You’ll be left with quite a bit of liquid so just pour it over the top and discard any excess. 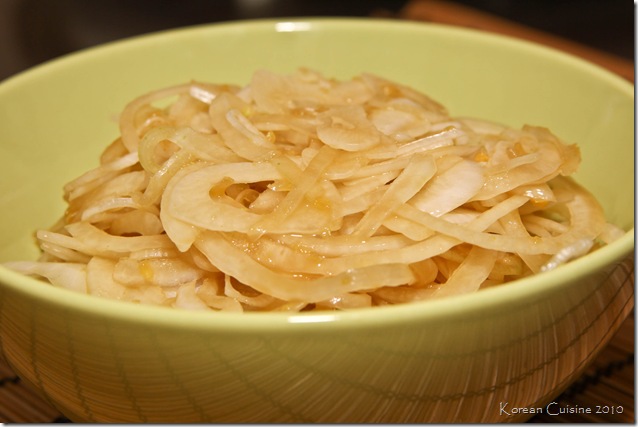 You’re now ready to eat with some gogi! 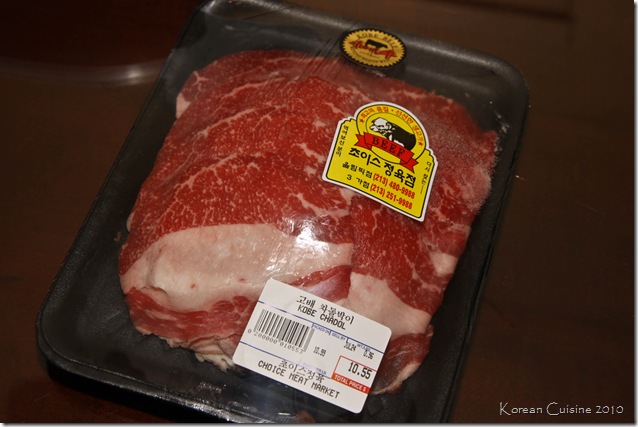 I know I’ve mentioned Choice Meat Market before and if you haven’t already, you MUST go and try their meats. 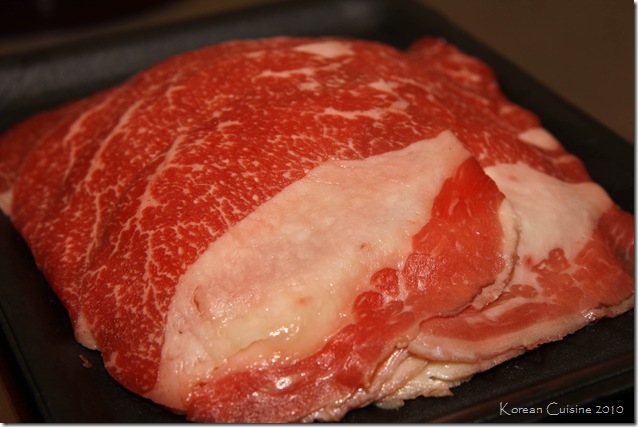 It’s a lot more than what you would pay at the K-market, but their meat melts in your mouth. 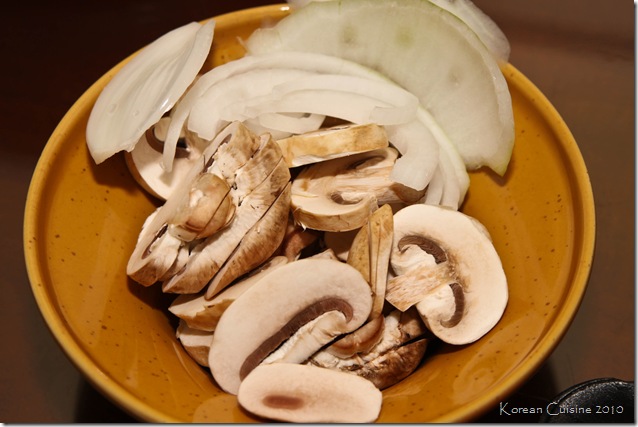 I sliced up some onions and mushrooms… 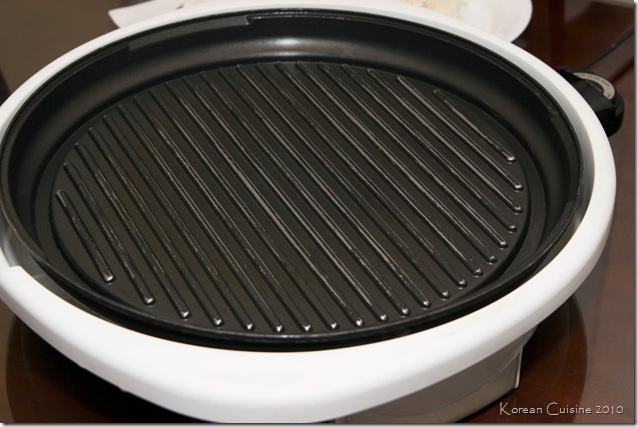 Got our trusty old indoor gogi-grill going (there’s even a compartment that collects the drained fat!) – I think the last time we brought this out was over two years ago! 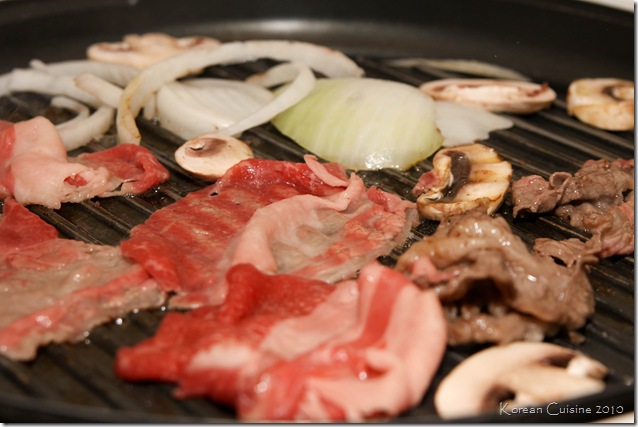 And then it was grilling time! 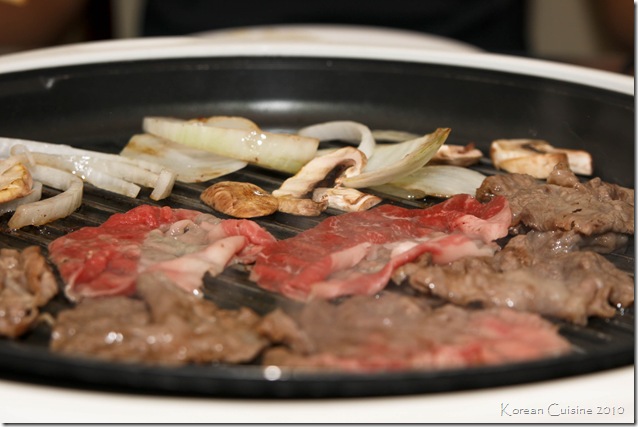 We ate the whole thing! 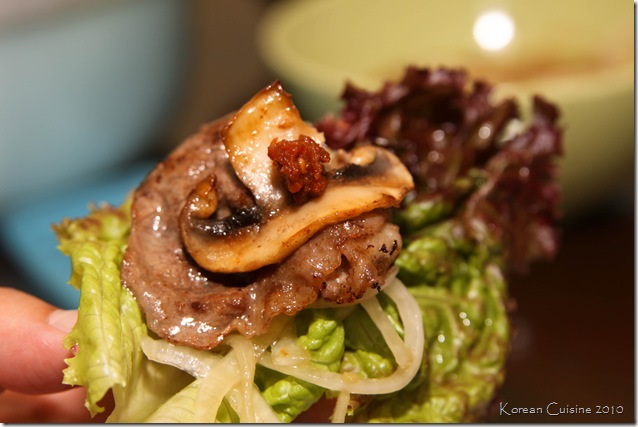 Everyone in our small family of three was happy and full!  Hope everyone is doing well.  I will *try* to be back sooner rather than later.  =)

Email ThisBlogThis!Share to TwitterShare to FacebookShare to Pinterest
Labels: Side Dishes (Banchans), Vegetarian

It's yet another sleepless night so I decided to check out my google analytics (really cool!) and found that I have had over 100,000 (103,702 to be exact! =P) unique visitors to this site.

Who knew that Korean food could be so popular?!

So I just wanted to say THANK YOU again to each and every one of you who visits this site. I'm sorry I don't update often, but like I say all the time this blog is a hobby and I just don't have enough hours in the day to sit and take step-by-step pictures of meals. =( When I *cook* for the blog it takes almost triple the time to make something. Not fun when you have a hungry, near-crazy toddler yelling for FOOD!

With that said, I'll try to post something up tomorrow. It's time to go to the K-market again, so let's see what I can whip up.

Hope everyone in SoCal is staying cool in this heat wave!!!
Posted by Korean Cuisine at 12:27 AM 7 comments: