Let me preface this post by saying there are many ways to cook a dish. There is no right way and no wrong way. If it tastes great to YOU, then you did it the right way!

I realized today that it has been about a year and a half since I started this blog. I've been going through some of my old recipes and my cooking has definitely evolved from some of those older posts. In present day cooking, I might add more shrimp jut or a little less gook ganjang or I may even be more liberal with fish sauce (something I don't like).

With the Lunar New Year's coming up, I decided to make some dduk mandoo gook.

There are so many ways to make dduk gook. You can make it using just plain beef broth like this. You can make different uses of gom gook and make it using that broth instead. You can add the egg directly in, you can pan fry it and add it separately, you can separate the meat and add it on top as a pretty garnish, or you can be lazy like me and shove everything into a pot at the same time.

Do what feels right for you! First, defrost some mandoo (dumplings). This mandoo was homemade by my husband's aunt. According to the MR, her family is known for their wonderfully delicious mandoos. He was right! They are absolutely divine. I *wish* I could make mandoo like this. I've made mandoo at home numerous times, but I can't quite seem to get the flavor of the older generations. 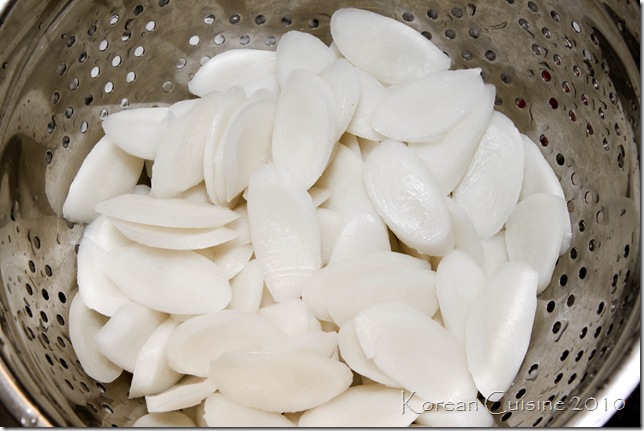 Defrost some dduk (rice cakes) and let it drain out as well. This is about half a bag. This recipe won't have EXACT measurements, so please don't kill me. This time I used flank meat. This is the meat you would use to make yook gae jang. I've already boiled the meat once and thrown out all the guck.  then added more water to make some beef broth. Meanwhile start getting your veggies ready. I julienned carrots and squash (about a cup each). Slice up 1/2 onion very thinly and slice 1 large mushroom thinly as well. 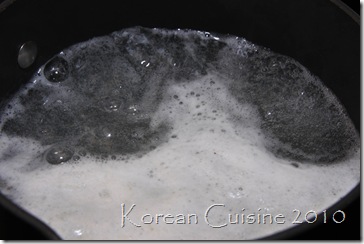 Let the beef broth boil for about 30 minutes or so. 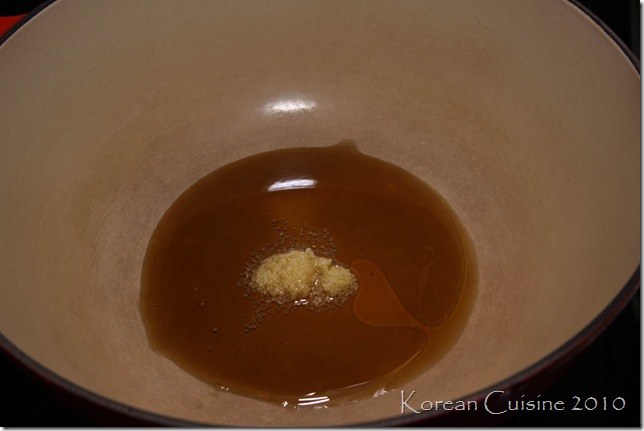 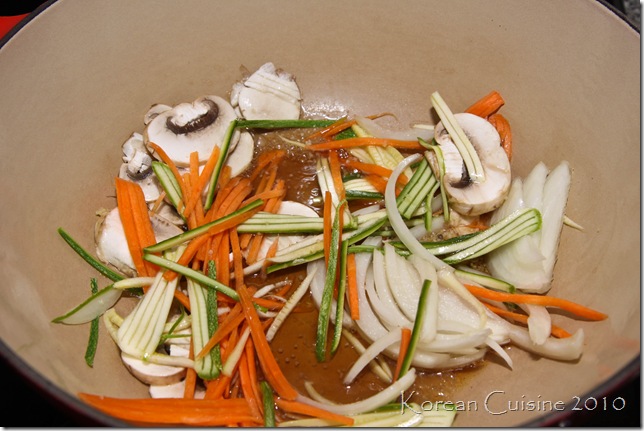 And then dump in all the veggies and stir away! Meanwhile, remove the meat from the broth and rinse it under cool water (so you don't burn your fingers like I did) and start ripping the meat off. It should be very easy to pull apart. This is exactly what you would do to make yook gae jang. 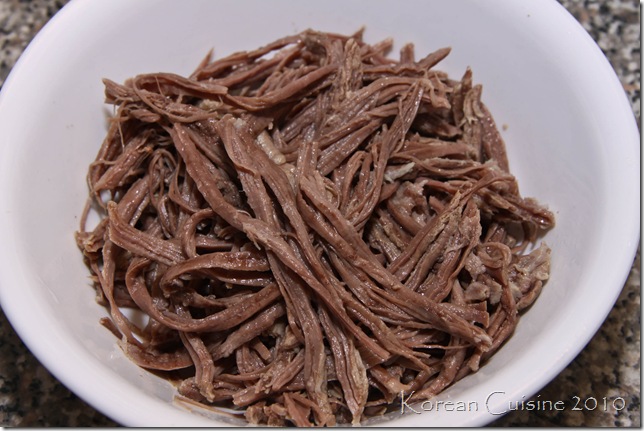 You want to achieve this. You can place this on top like a garnish when you're done with the dduk gook. 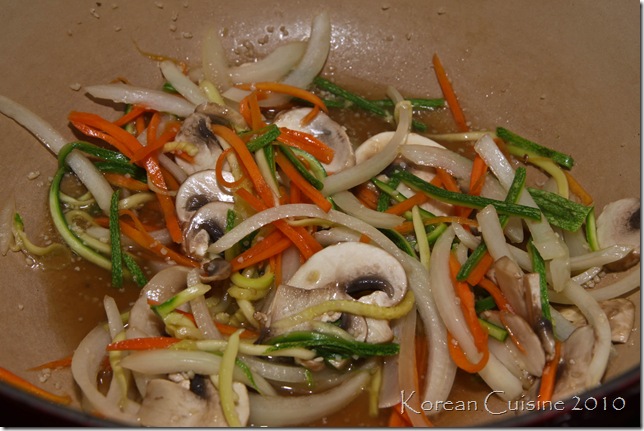 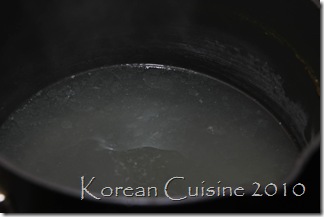 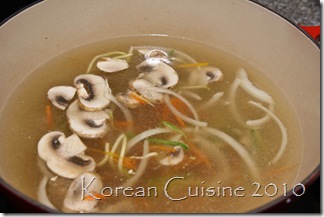 Add all the beef broth and continue boiling. 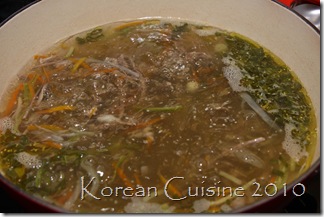 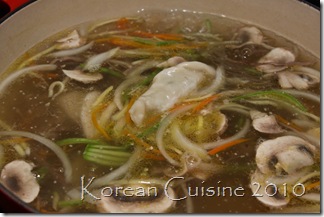 Then throw in the meat (I’m lazy) and the mandoo and dduk!  No, I do not know how many cups of water I used. =/ I use this Le Creuset pot (yes, it's worth the $$$) when I cook and I just eyeball it. I add just enough water so that everything won't boil over. So...4 quarts? I added MORE water after I took this picture. There wasn't enough beef broth. 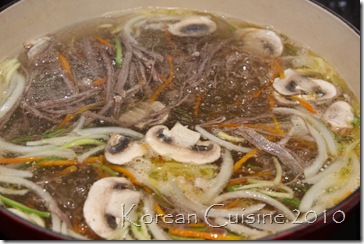 Go ahead and add some green onions! 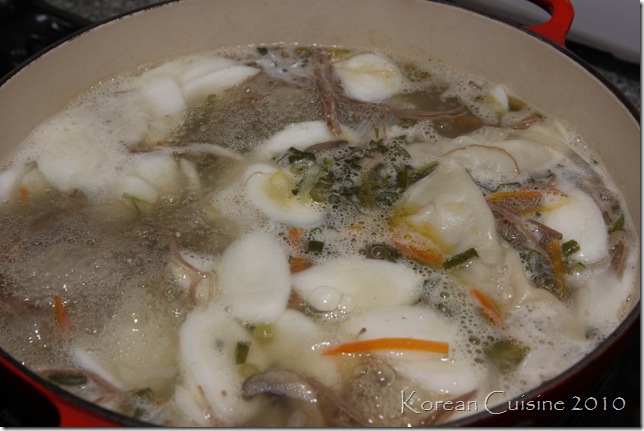 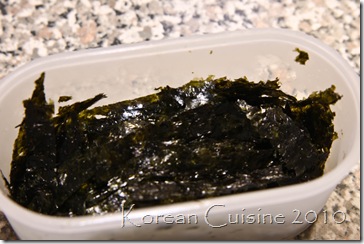 Cut some gim up! 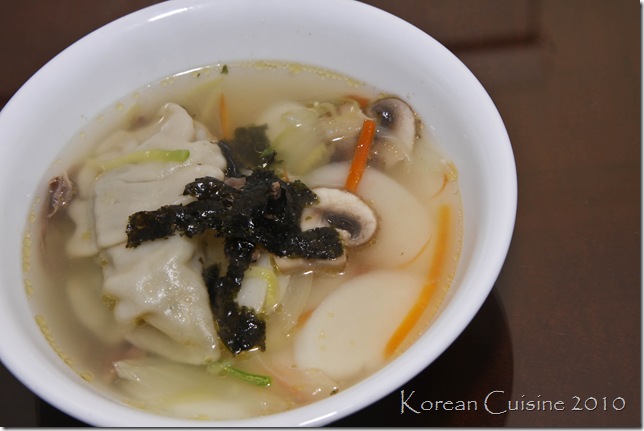 And then place some on top.  This is the MR’s egg-less version. My husband absolutely LOATHES eggs. 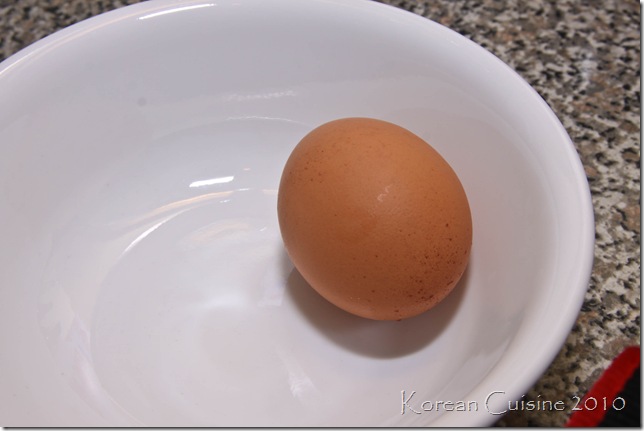 After I was sure that the MR was satisfied with his portion, I went and cracked an egg directly into the soup and let it boil some more. 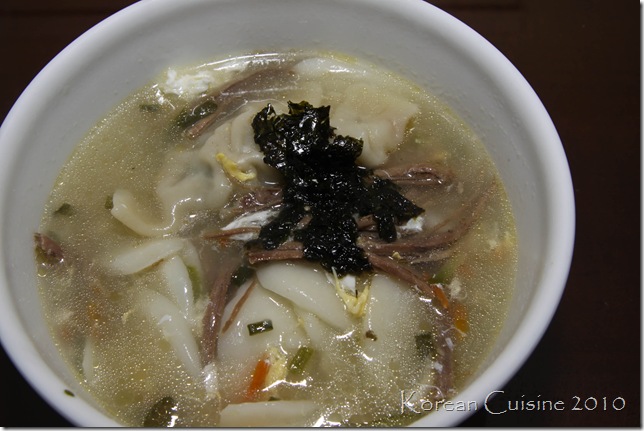 This is the egg version that Munchkin and I enjoyed. =) 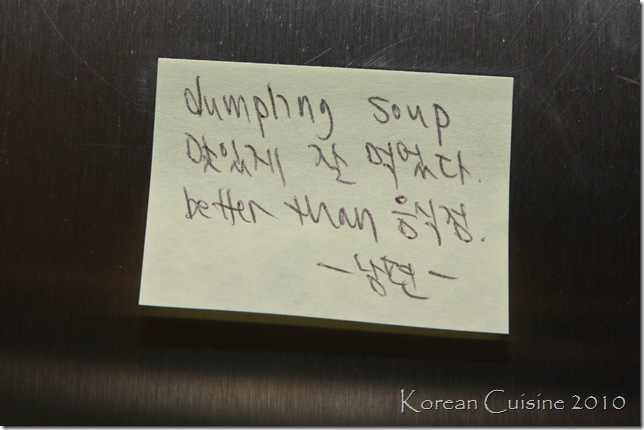 I later found this note stuck to the fridge. It made me smile.

HAPPY *early* VALENTINE'S DAY! Go hug the one you love...even if they annoy you.

Posted by Korean Cuisine at 8:44 AM