I haven’t made this type of jook in so long…since Munchkin was a baby? 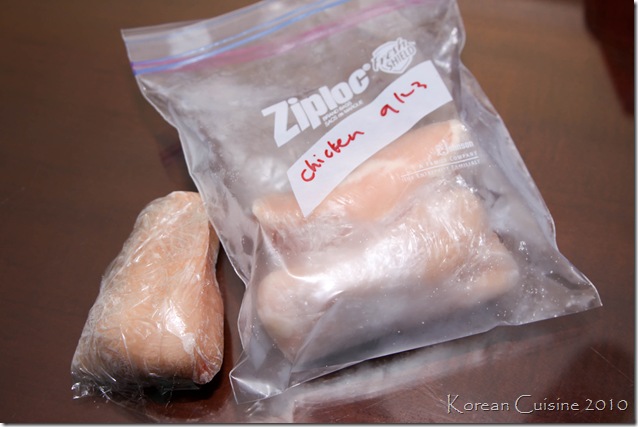 We are a small family of three, so we hardly ever eat whole packs of any type of meat.  As soon as I get home from the grocery store, I saran wrap each individual breast filet and then store them in a large Ziploc bag with the date on it.  Whenever I need chicken, I just pull out however many breasts I need.  It makes cooking easier when you don’t have to defrost the whole pack of meat at once. 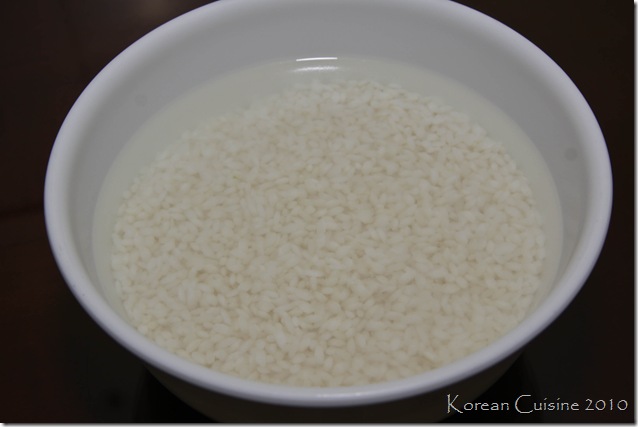 Begin by washing and rinsing equal parts white rice and sweet rice.  This was about 1 CUP total.  Let it sit in the water for a few hours to soften up. 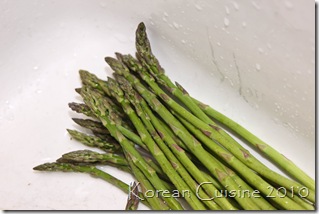 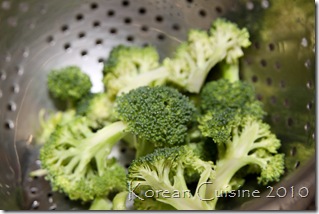 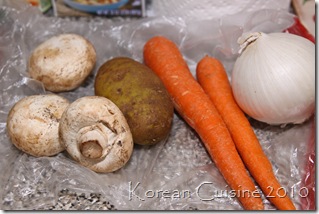 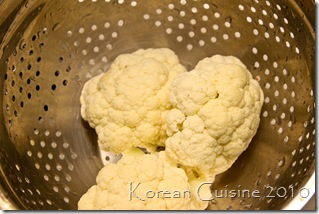 Meanwhile, prep all the veggies you want to use.  There is no *measurement* for this part so use whatever you have on hand.  I also added some squash but forgot to take a picture of it. 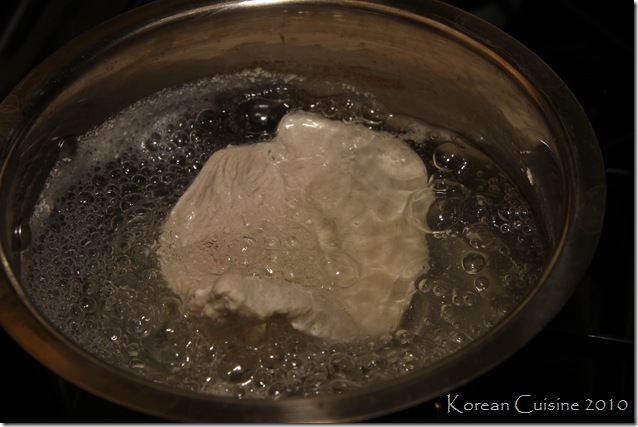 Bring a pot of water to a boil and throw in the chicken and let it boil for about 10 minutes to rid of all the impurities. 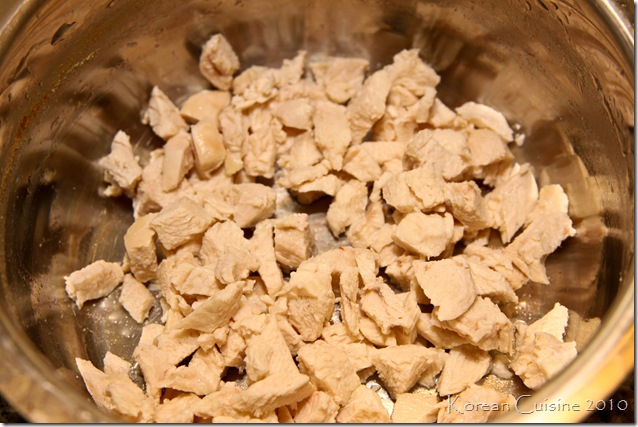 Then rinse the chicken under cool water and just chop it up into small pieces and set it aside. 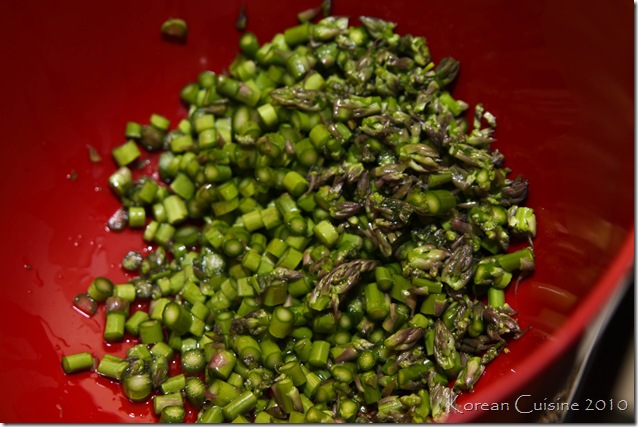 Now you can start chopping away at your veggies.  If you have a food processor, by all means throw it in there.  But I actually prefer to just CHOP, CHOP, CHOP.  There’s something therapeutic about standing in a kitchen and chopping away.  I started making this porridge after midnight yesterday and I was actually able to complete my MOH speech (in my head) that I have do next March.  LOL. 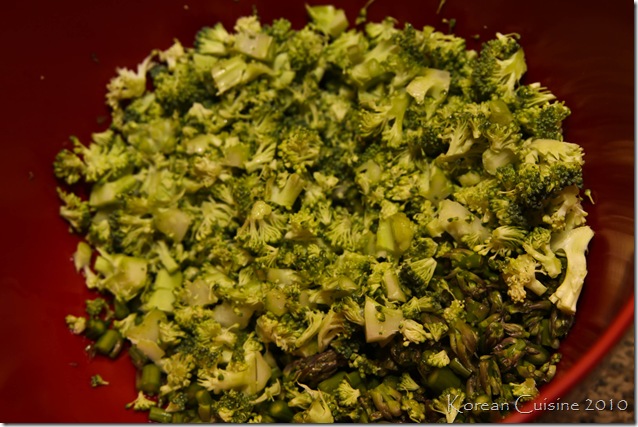 I then chopped some broccoli and threw that in there as well. 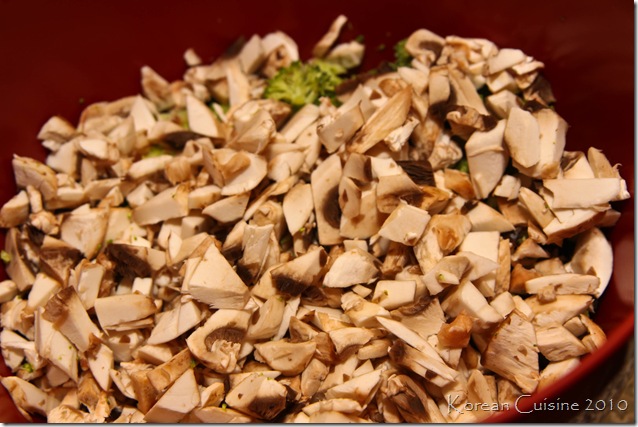 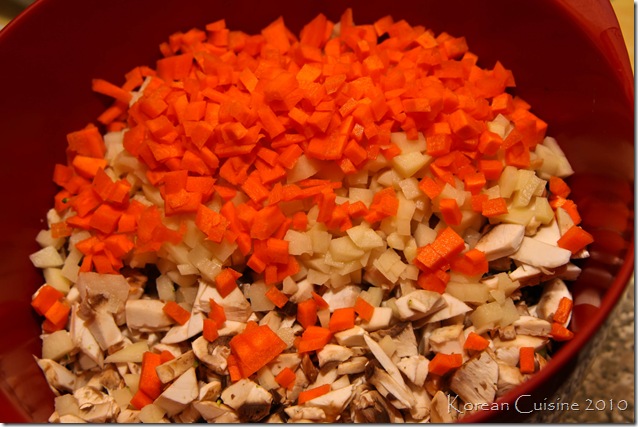 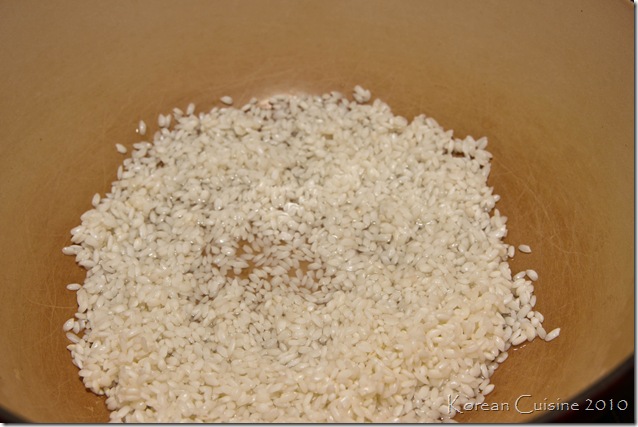 Start the porridge by placing the cup of rice & sweet rice mixture into a pot. 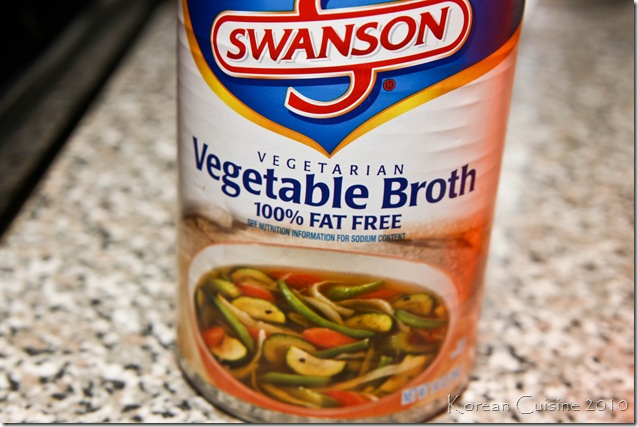 Then add one whole can of vegetable broth and bring it to a boil. 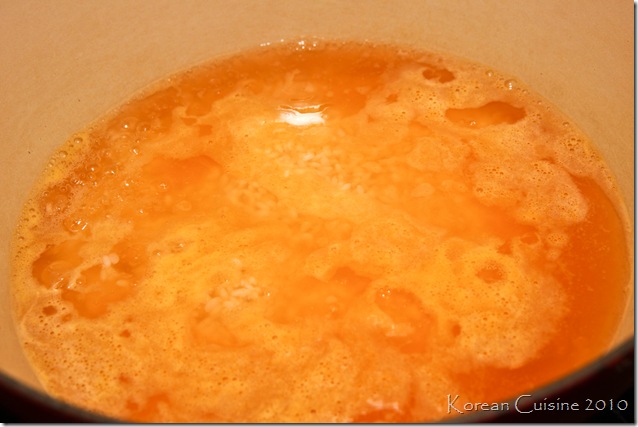 Once it starts boiling… 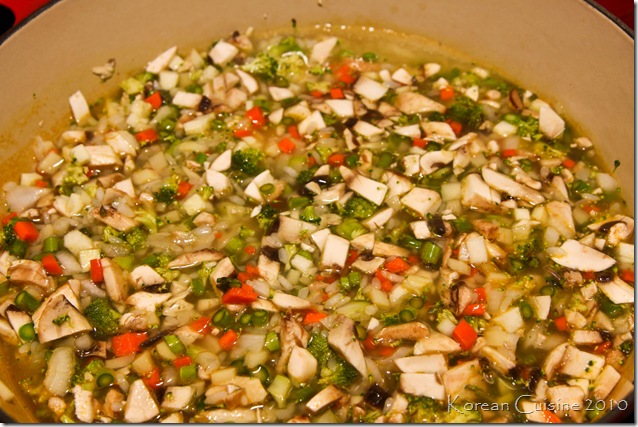 Throw in all your vegetables and the chicken pieces! 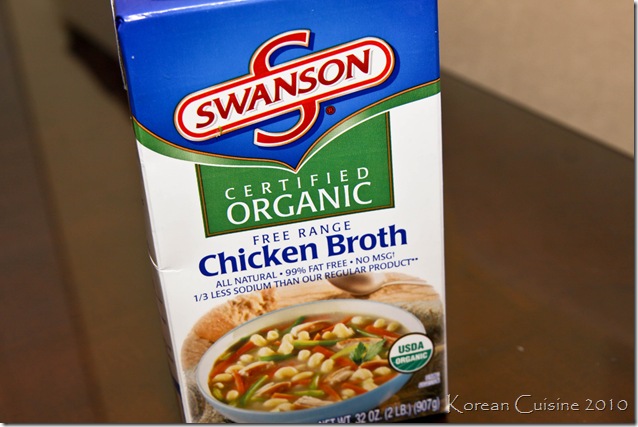 At this point, start adding some chicken broth a little bit at a time.  I ended up using all 32 OZ. PLUS an additional 2-3 CUPS of water.

If you are going to feed this to a baby, skip all the store bought broths and just substitute with anchovy broth, real chicken broth or just plain old water.  I’m proud to say that Munchkin grew up eating this stuff and to this day, he’s still a pretty good vegetable eater.  =)  I would alternate with different meats and veggies, but pretty much I used the same concept for all his baby food.  I pureed everything when he was younger and after he started getting his teeth, I started to make his jook into a chunkier consistency. 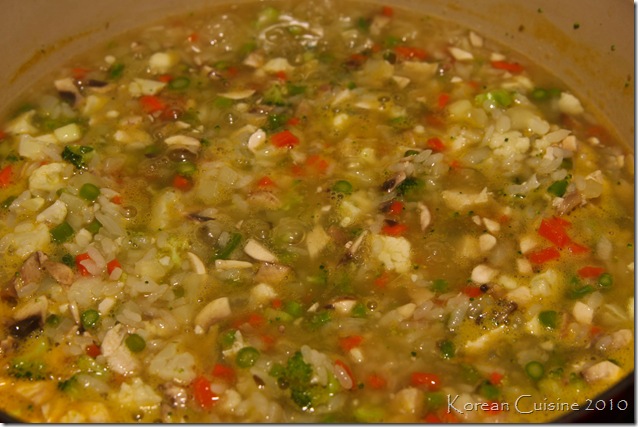 Anyhow, just keep letting it simmer while stirring constantly so it doesn’t stick to the bottom. 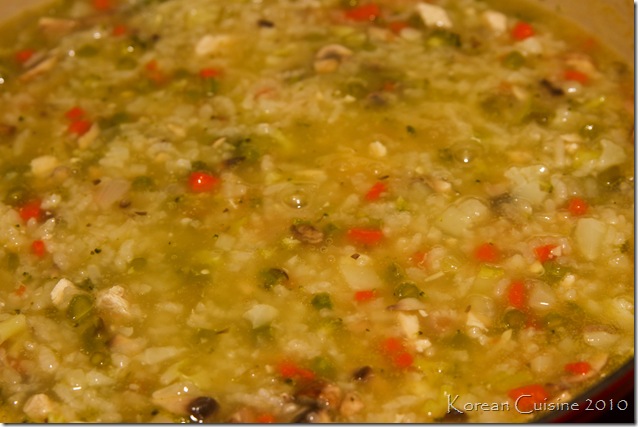 After about an hour and a half - it will get this nice, soft porridge consistency. 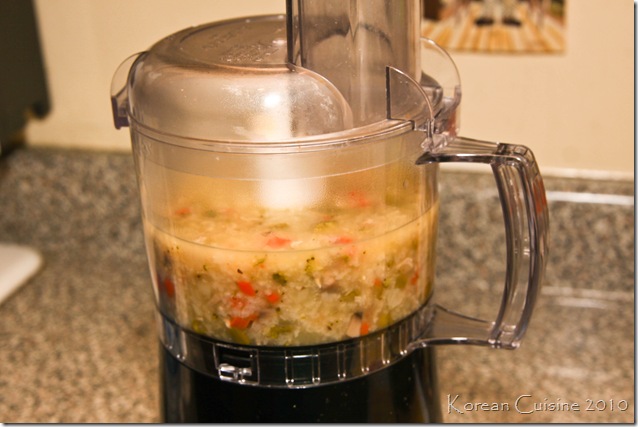 I wasn’t sure how soft the food had to be for the person this porridge was made for, so I pureed two batches and left two as is. 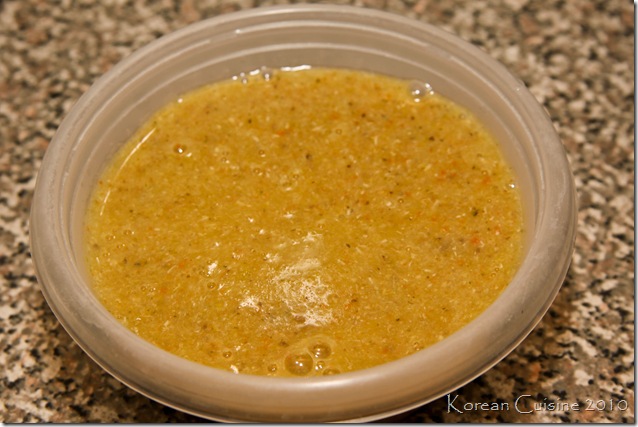 Jook~ with chicken and a load of vegetables pureed for easy consumption. 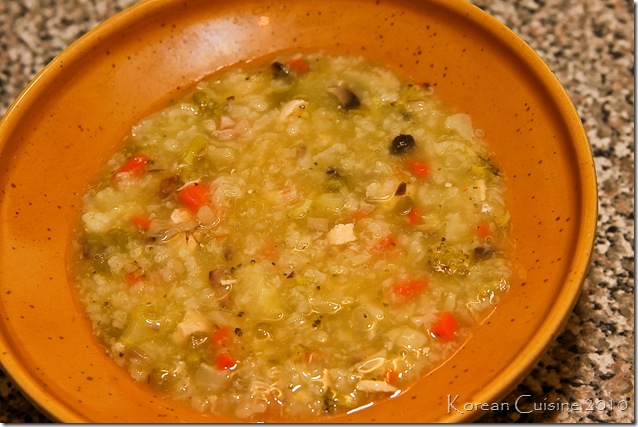 Even though he’s no longer a baby, Munchkin will still devour this stuff.  This was his breakfast. 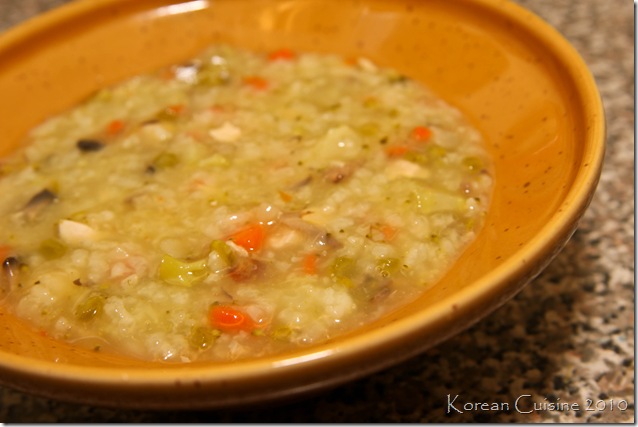 Tada!  It’s the perfect dish for infants or for someone who might have difficulty chewing.  You can substitute the chicken for beef, you can use a different broth, you can add a variety of different vegetables.  Some other veggies I use are edamame beans, corn, or even spinach.  Get creative!