So I finally made gamja tang today using the recipe I found a few days ago. The HK Market didn't have the pork backbone (I wonder why?) so I went to Ranch 99 and the butcher was nice enough to cut them into 2 inch pieces for me.

HERE IS THE ORIGINAL RECIPE I FOLLOWED.

Although the recipe was a good outline for me to follow, I thought it could stand to use a little tweaking. Hubby really enjoyed it tonight, but I wasn't too happy with it...I will explain below. 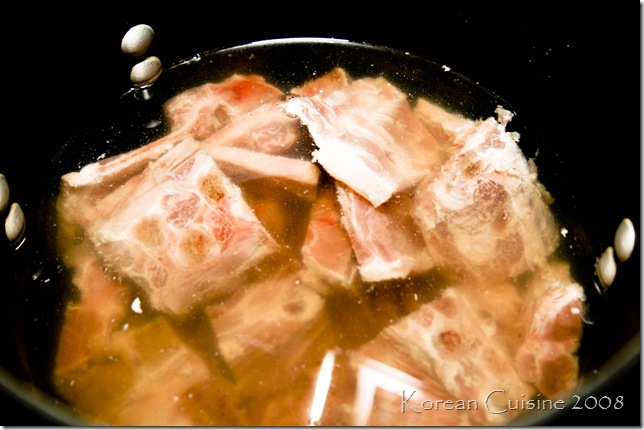 I bought 6 lbs. of bones today and quickly realized after sticking them into my pot that it was WAY too much. I put half into the freezer, so I ended up using about 3 lbs. First, get a big pot of water and drain all the blood for a couple of hours. I changed the water every 30 minutes or so to keep it fresh and gave all the bones a nice scrub down. After the blood is all drained, bring the bones to a boil with a little less than half a tablespoon of dwenjang and coffee. I'm assuming this is done to get the pork smell out of the meat. It worked~ 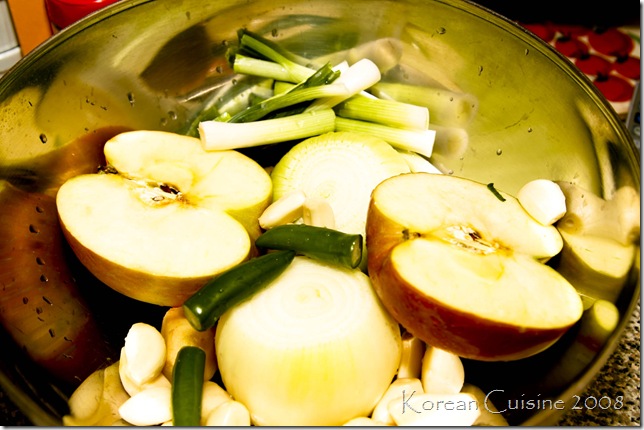 While the meat was boiling, I readied all the vegetables & fruit. 2 large onions, about 10 whole garlic cloves, some chili peppers (I just bought serrano peppers), a big piece of ginger, and 8 green onions (mostly the white part). Although there's an apple in the picture just ignore it. I added the apples and it ended up being too sweet. I had 2nd thoughts about the apple when I originally looked at the recipe and I should have gone with my gut instinct. There was a distinct sweetness to the gamja tang that I did NOT like. Next time I will omit the apple for sure. 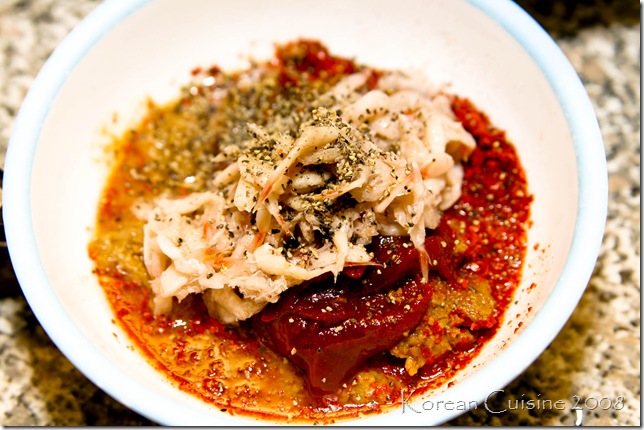 While the meat is boiling, get the sauce ready too.

This is what the original recipe called for - in parentheses is what I did.
3 tbs. shrimp jut (I added about 4 tbs.)
3 tbs. dwenjang
3 tbs. gochujang
(I added about 5-6 tbs. of gochugaru since I like everything spicy)
3 tbs. soju (or rice wine)
Generous amount of sesame seeds and black pepper 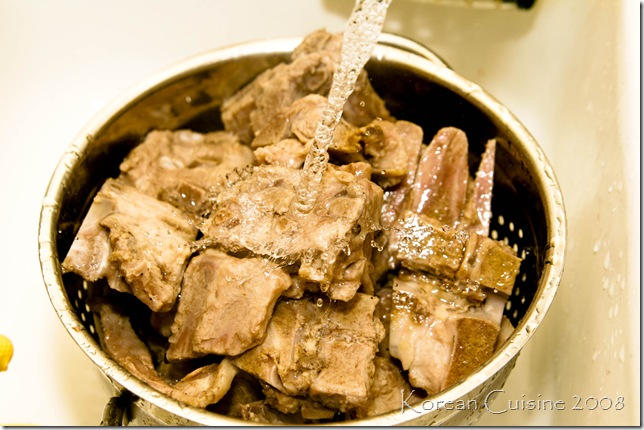 After your vegetables and sauce are ready, the meat should have boiled for a good amount of time. Run it under cold water and give it a nice cleansing. I also washed out the pot at this point and filled it up with new water. 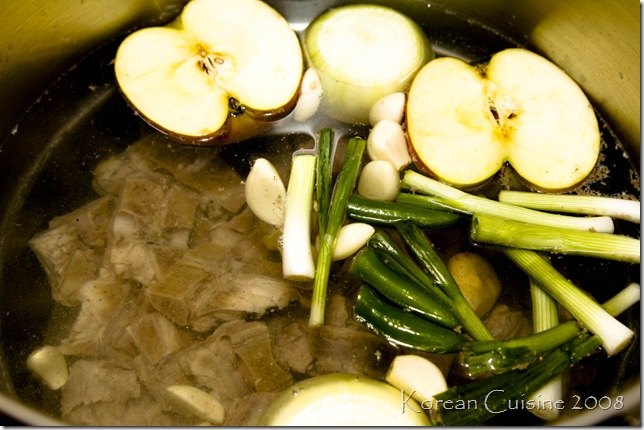 Then I realized my pot was too small, so I switched over to my huge gom gook pot (BIG MISTAKE!) I think I ended up using way too much water. I had to boil this for 5 hours to reduce all the water~ sheesh. 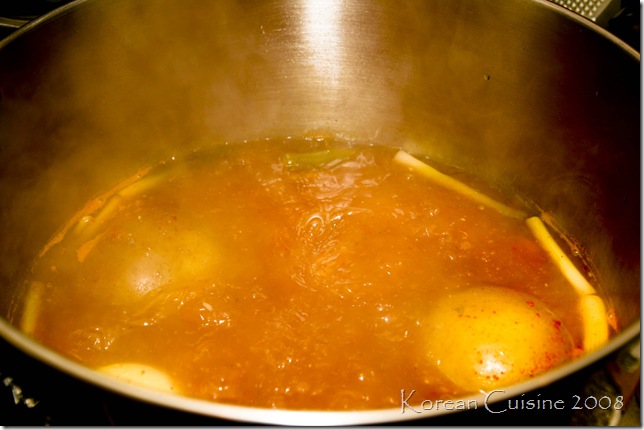 Anyhow, once the water starts boiling...add the sauce ingredients. 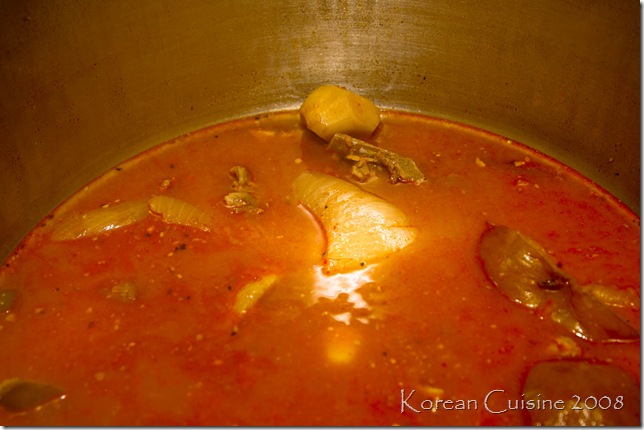 Like I said before, I let it boil for over 5 hours and the liquid was reduced to about half of what i started with. 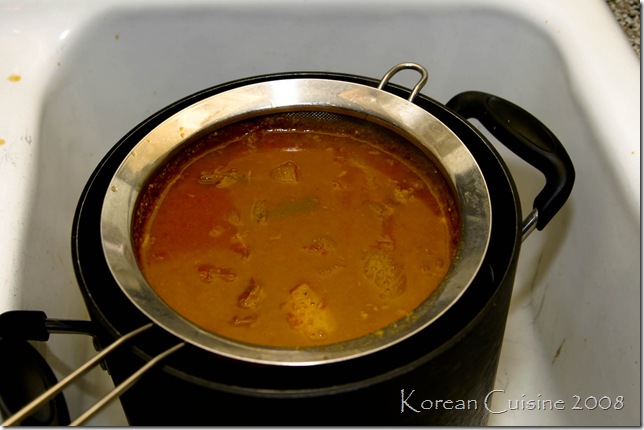 I drained the liquid through a strainer and placed all the other stuff back into the pot. 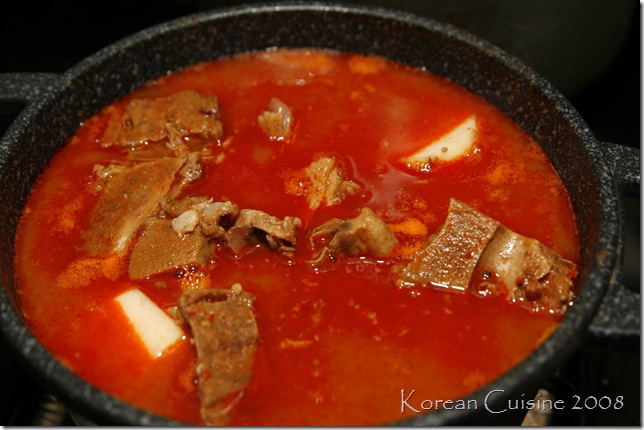 I then divided the liquid in half and carefully picked out only the meat and bones and placed it into yet another pot. 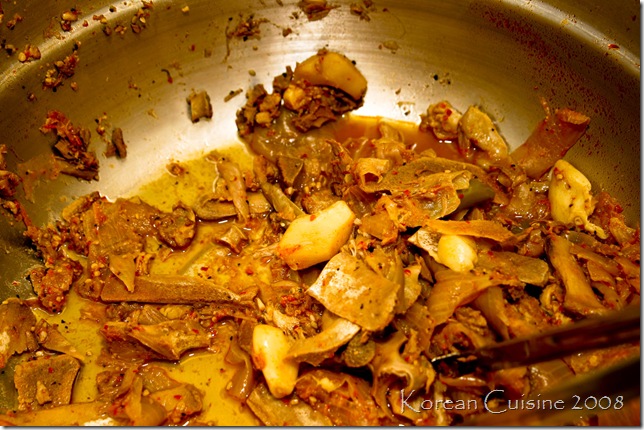 This was all the gunk leftover at the bottom of Pot A. 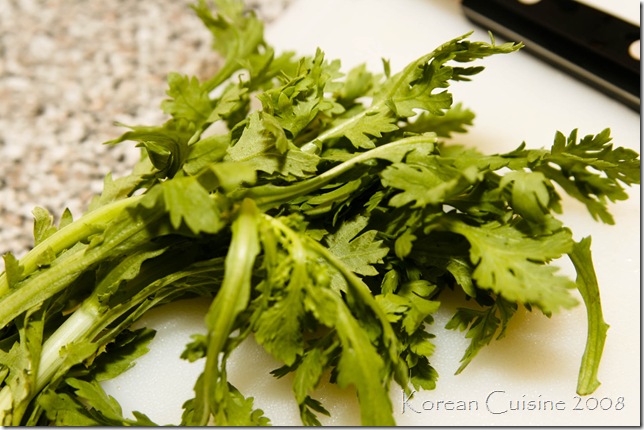 I added some of this. I forgot what it called....sook joo? sook gat? Anyone? 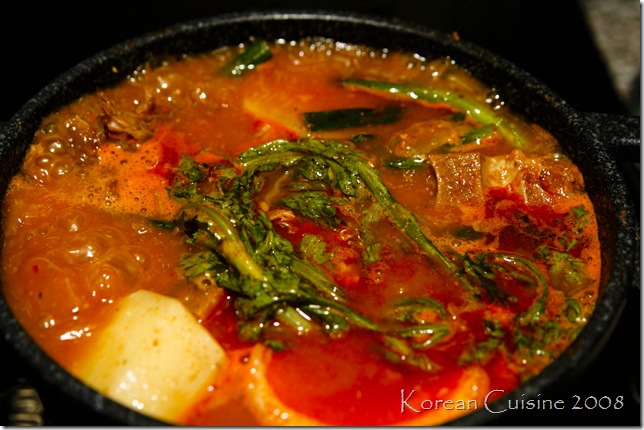 Of course you can't forget the most important potatoes! I threw in some potatoes, fresh green onions, and added the green stuff on top. Add some sesame seeds and perilla seeds and you're done. I actually found the recipe to be a bit bland, so even though the recipe said not to use salt...I added a little salt and gook ganjang. I suppose it turned out okay for a first try, but I will definitely omit the apples next time. It had this irritating sweetness that shouldn't be present in gamja tang.

Even so, hubby liked it....and he's picky when it comes to food~

I have half left over and I placed it into the fridge for tomorrow. The recipe states that you should put it into the fridge overnight so the meat gets fully marinaded by the gookmool. Who knows? Maybe tomorrow I won't have to add salt...
Posted by Korean Cuisine at 8:31 PM